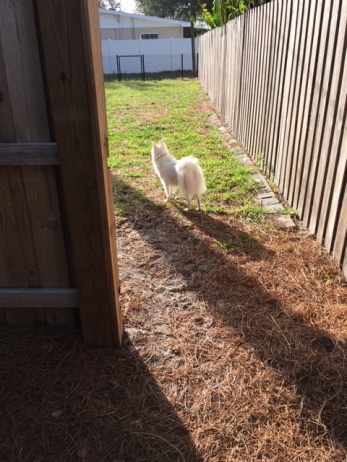 Henry David Thoreau and Meeko are good companions. I curl up with each of them at different times. Last night when I had turned off the lights in the bedroom, called Meeko to bed and turned on my side to sleep, I felt Meeko put his rubber squeak toy at the nape of my neck and then lie down. I felt honored.

Today,  in the yard, under the Live Oak on a lovely Spring day,  I read a compilation of HDT’s essays.  His style is more verbose than we modern folks are used to.  I do not  understand some of his archaic terms, and I admit to skipping over some page long paragraphs, yet he startles me with thoughts that are so contemporary that he could be writing in 2017. Reading his essays is like mining for gold—which he thought was a dishonorable activity, by the way— but you are sure the nuggets are there and they are and there are many.  Like this.

(I’ll be right back. Meek is nosing his bowl telling me he wants his dinner). Okay, I’m back. Here are some his thoughts that startle me in how familiar they seem. This passage describes so closely what Buddhism teaches me.

“If we have I believe that the mind can be permanently profaned by the habit of attending  to trivial things, so that all our thoughts shall be tinged with triviality. Our very intellect shall be macadamized, as it were,–its foundations broken into fragments…If we have thus desecrated ourselves—as who has no?t–the remedy will be by wariness and devotion to reconsecrate ourselves…We should treat our minds, that is , ourselves, as innocent and ingenuous children, whose guardians were are, and be careful what objects and what subjects be thrust on their attention.”

HDT would like that I was sitting under a tree while reading this.  He would applaud my urge to always be outdoors. I think he and I share a lot in common—like his hermit tendencies that are mine also.  Today I feel close to old Henry. I think he would understand me. Both of us pretty much loners who have a difficult time in polite company. It comforts me that he writes about the emptiness of much of what we consider “success” and he called “industry”—how the industrious man was praised all for making money, and yet a philosopher, a writer like HDT, is seen as lazy, a failure even. I think even Ralph Waldo Emerson, his friend, criticized him for lack of ambition.

Like Thoreau, I could never make myself work for money. My work needed to be meaningful and helpful to others. As a result, I am not rich. Neither was Thoreau, and I , like him, can sometimes feel like an outcast in my society  when it comes to owning a house and a new car. And I have to watch my mind, as he suggested, to keep it from thinking of myself as a failure because I don’t have “fame” and fortune.

It wasn’t easy being Thoreau. And maybe he was no fun to be in a bar with, but I sense him in the room with me as he says, “I shall be a benefactor…if I can show men that there is some beauty awake while they are asleep.” He was speaking of taking walks in the moonlight, but I understand it to mean what Buddha meant. You are my benefactor HDT, even if you had a lousy personality. Smiley face.